Crash of 1929 and climate crisis 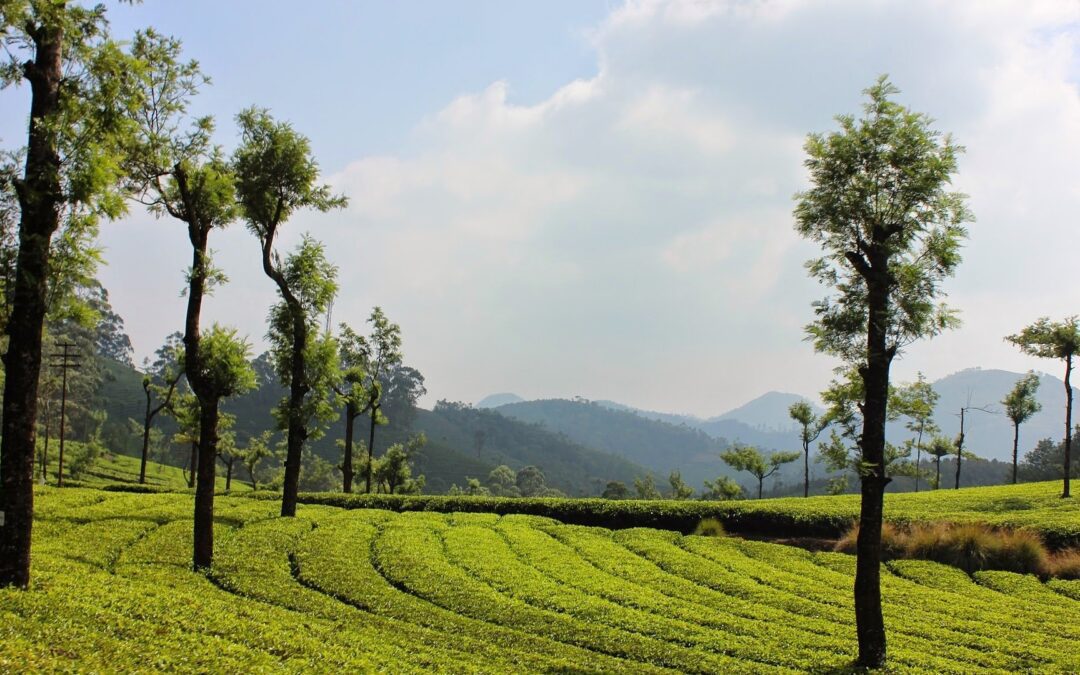 The second industrial revolution at the turn of the 20th century was marked by the production of electricity, gas, and oil: it forged the world as we know it. The fruit of the important work of women and men has made mechanisation of economies; agriculture optimisation; technology development; democracy and freedom possible [1]. The intensive use of fossil fuels has made it possible to accelerate the development of industrial countries exponentially. However, this pace seems unsustainable in view of the climate targets set by science: if all the unextracted fossil resources were used, global warming would not be 2 or 3 degrees C, but at least 6.5 degrees C. Everyone will agree that this is a catastrophic scenario[2]. The Roaring Twenties of this period led to the stock market crash of 1929 when the production of goods far exceeded the consumerism abilities of households. We will see how the development of the economic crisis corresponds analogically to the current climate crisis.

According to a study published in the journal Nature last September, 60% of oil and gas as well as 90% of coal reserves must remain in the Earth’s subsoil to have 50% chance of keeping the increase in global temperature under 2 degrees Celsius [3]. This news is associated with astronomical economic losses for the companies and governments that exploit these resources. No laws or coercive measures oblige them to reduce their production. So much so, that the Canadian federal government plans to increase its oil production by 25% and that of oil by 6%, while reducing its greenhouse gas emissions by 28% by 2030. Ottawa intends to rely on atmospheric CO2 capture technologies, while no current technology allows such reductions [4].

Coal was formed in the Earth’s subsoil 300 million years ago, while oil and gas were formed between 10 and 180 million years ago [5]. The accumulation and transformation of plants and algae debris in coal, oil, and gas spans more than a hundred million years while it is burned in a few hundred years. During the combustion of these refined fossil fuels, the carbon that forms them, combine with oxygen from the atmosphere to create CO2 [6]. The carbon cycle that once operated in equilibrium was turned upside down during the industrial Revolution. The extraction and combustion of these resources adds major leaks of CO2 to the atmosphere without the addition of carbon absorption sources.

As a result, carbon accumulates in the atmosphere faster than plants and the oceans absorb it (see Figure 1 below). Photosynthetic organisms fail to respond to the “manufacturing production” of atmospheric CO2, in the way that manufacturing supply of the 1920s is not filled. The Crash of 1929 and the current climate crisis depend on supply and demand. Insufficient carbon demand, it must be increased since production is unfortunately not slowing down at high rates. 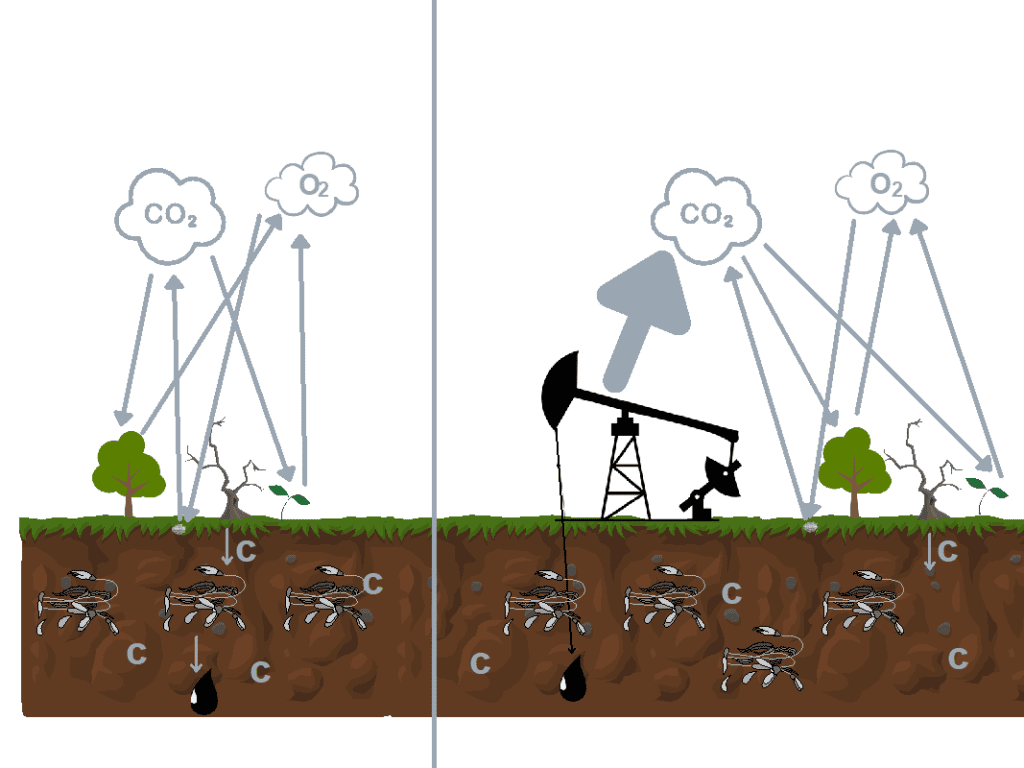 Figure 1: Portion of the carbon cycle that involves fossil fuels before (left) and after (right) their discovery. Illustrated is the portion of the terrestrial carbon cycle that forms coal and natural gas [5]. Trees, and plants absorb CO2 from the atmosphere to transform it into biomass (carbon stored in their trunks, branches, roots, leaves) and oxygen. When they die, the carbon (C) that was then stored, is buried in the ground. Microorganisms in turn release CO2 by breaking down organic matter. The accumulation of debris on the Earth’s surface pushes the oldest down in the subsoil where the environment becomes oxygen-poor. The temperature and pressure become high enough to turn this organic matter into fossil fuels [7]. On the right, it is the same cycle, but the extraction activities are set in motion. Note the thick arrow of CO2 emissions associated with the rapid combustion of these energies (illustrated is their extraction, but a few refinery steps are required before they can be used as energy). This step modifies the natural carbon cycle: no additional source captures the atmospheric CO2 in “surplus”. The aquatic and oceanic portion of the carbon cycle forms oil and natural gas from algae debris.

Since the industrial era, an increase of 1.1 degrees Celsius has been measured. If the status quo of emissions is maintained, we would have 11 and a half years left before exhausting the remaining carbon budget before inducing a global temperature increase of 1.5 degrees Celsius [9]. The scientific community states that a reduction to an unprecedented rate of emissions as well as a withdrawal of atmospheric CO2 is mandatory. We must work together with nature to develop ingenious solutions. Several companies and governments are emphasizing the offsetting of emissions from the fossil fuel sector by supporting tree planting projects [10].

But can we really offset emissions from fossil fuels in this way?

Nature-based solutions have the potential to provide around 30% of the climate action required to achieve the 2030 targets [11]. However, they must be used in tandem with the decarbonisation of the global economy at high speed to exploit their full potential. Their capacity remains modest relative to what can be achieved by the rapid abandonment of fossil fuels [10].

The continuous offsetting of emissions from this sector has certain non-negligible limits. 30 times more space is required in tree plantations to store an equivalent amount of carbon in mature forests. The space available for reforestation is finite and it can lead to social and economic inequalities*. The factors that influence tree growth must be kept in mind: in a warmer climate, atmospheric CO2 uptake is exacerbated, but tree mortality is also higher (lack of water, fires, droughts) [12]. According to IPCC Special Report published in 2019 [13], reducing rates of deforestation and forest degradation is one of the most effective and robust options for minimizing the impacts of climate change, in addition to providing co-benefits such as climate adaptation and biodiversity conservation [10].

The goal is to stabilize CO2 concentrations in the atmosphere. However, this stability will be determined by the totality of emissions accumulated in previous centuries and not only by the contemporary balance between emissions and withdrawals [9]. Thus, nature-based solutions should not distract businesses and governments from achieving climate targets. Priority must be given to reductions of emissions at source and when compensating for irreducible ones, quality credits that guarantee quantified reductions and sequestrations should be chosen [14]. Using Nature-based solutions to offset current emissions offers a short-term solution for businesses.

Nevertheless, they must invest in parallel in their own decarbonisation and in the development of new low-carbon technologies. A tangent towards the 3rd industrial revolution is emerging; that of the energetic transition so that communities can continue to operate at high speed but this time, in a sustainable way.

Text written by: Alexie Roy-Lafontaine, Scientific Writer for the Web and Social Networks.