Degrowth: The Only Way Out of The Climate Crisis? 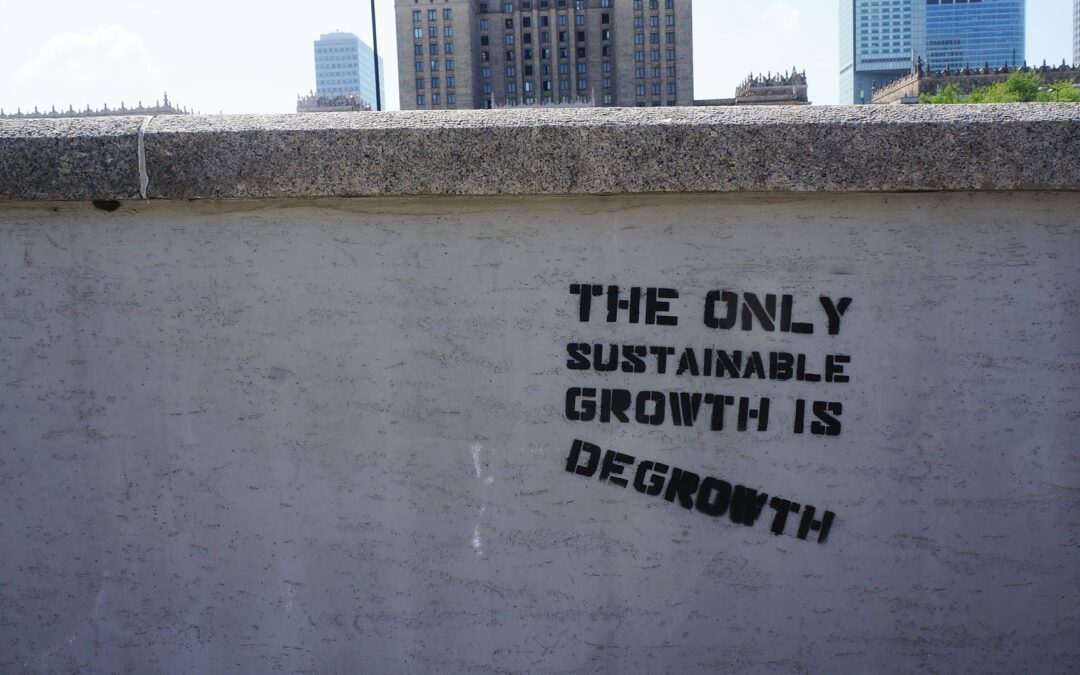 Seven years after the ratification of the Paris Agreement in 2015, the trend in global GHG emissions is still on the rise. A decrease in the level of these emissions was recorded at the beginning of 2020 because of the pandemic spread of COVID-19. Nevertheless, emissions have quickly recovered to their pre-pandemic value to reach levels never recorded [1]. However, the overall wealth of countries is also increasing. Gross Domestic Product (GDP) is used to measure the size and economic growth of a country, or in other words, its level of wealth [2]. Of course, the value of GDP in some countries is growing faster than in others. While that of others evolves rather downwards. However, overall, since the 2nd World War, the average value of GDP is increasing. Traditionally, if GDP stagnates or declines, then the country is in recession, in other words, the country is in a bad situation! However, in 2017, 82% of the new wealth created in the world ended up in the bank accounts of the 1% of the wealthiest people [3], which has widened inequalities.

Our economic system is based on perpetual growth. To generate this growth, we must consume more and therefore produce more. This linear model is also based on the extraction of natural resources to produce what we consume, but also to pack and transport goods. This quest for growth means that we are exploiting these resources at a faster rate than their regeneration. In 2021, Global Overshoot Day took place on July 29 [4]. This date marks the exhaustion of the annual budget of planetary resources: in 2021, it will have taken us 6 months and 28 days to spend all the resources that the planet can generate in a year. Our frantic pace of consumption pushes us to tap into the resources that Earth has been storing for thousands of years since we do not respect the budget it allocates to us annually. One wonders if this desire for infinite growth is possible on a planet with finite resources.

In 1972, that is exactly what the Meadows Report highlights with its comprehensive document entitled « The Limits to Growth ». The collective of scientists discusses the risks of environmental and economic disasters linked to the quest for infinite growth based on limited resources. This completely ignored warning calls for consideration of the threshold of ecosystems in terms of their ability to meet human needs. Strangely timeless, the conclusions drawn in this report are still relevant today [5]. Between the proliferation of the concept of sustainable development and the 26 annual international summits on the climate crisis of recent decades, a completely different current of thought is emerging internationally: that of degrowth.

The idea of degrowth brings about a drastic paradigm shift: it rejects the foundations of our current economic system. The movement calls for a contraction of global economies to release anthropogenic pressures on natural ecosystems. The “degrowthers” propose to produce less, have fewer material gains, and to choose goods that are more durable and easier to repair [6]. In this way, our overall activities would be much less extractive, and our waste production would decrease drastically. By consuming less, we would have to produce less and therefore work less. We would have more free time to devote to our families and friends, to get involved in the maintenance of a collective garden, or for the exchange of goods and services for example [7].

To decrease is not only to reduce but also to do otherwise. For these people, the only way to save the human species from the catastrophic impacts of the climate crisis is to reduce economic activity. Humans would no longer be mostly destined to work to run the economic machine. This change in the social and economic foundations would leave less room for private enterprises and more room for cooperatives and self-managed enterprises to operate at a larger scale. There would no longer be resource owners, but more resource managers to transform our vision of ownership. For example, La Remise, located in Montreal, is a cooperative that lends tools and household appliances to the people of the community. It allows citizens to borrow round saws or machines to make homemade fresh pasta so that people do not have to buy these objects that are useful only 2 times a year! This simple operating model is part of the ideas advocated by degrowth since it induces a reduction in the consumption of material goods [8]. Our relationship to transportation and travel is also called into question by this theory. The blatant desire to own a car, to travel significant distances without thinking about the environmental and social consequences of it are impacts of the individualism imposed by the current economic system.

Many might think that we would bury ourselves in a perpetual recession, but the defenders of degrowth advocate a profound transformation of the values of the economy and this, intentionally [9]. We would be transitioning away from capitalism and economic growth as a political priority. The priority would be to meet human needs while respecting the biophysical limits of the planet and reducing social inequalities. This theory, which interests environmental militants, academics, and politicians, position itself at the anti-pole of capitalism and even criticizes the concept of sustainable development. For degrowthers, it is impossible to continue to grow economies even by integrating clean technologies and energies.

After all, in an open letter signed by more than 11 000 scientists, they declare that the planet is “clearly and unequivocally” in a state of climate emergency. Then, this state of emergency is “intimately linked to excessive consumption in affluent countries” [10].

The Heated Debate Around Degrowth

However, degrowth is far from being an idea advocated by all. Many criticize it for being a far-fetched utopia. Those who criticize it wonder whether the problem of global poverty can be solved in a system without economic growth. Then, in the coming years, most of the carbon emissions will come from countries that are emerging from development such as China and India. The more Western countries decarbonize, the more emerging countries occupy a significant share of global GHG emissions. So, if developing countries continue to grow to a certain level, most of the source of GHG emissions is not addressed. Thus, the chances of minimizing the impacts of climate change through degrowth are greatly reduced. We have seen with the COVID-19 pandemic that the global economy is interconnected. If Western countries start to shrink and consume less, the impacts of reducing imports from emerging countries could be catastrophic [9]. Proponents of growth put forward the theory of decoupling, according to which, beyond a certain level of wealth, technical progress makes it possible to reduce the pressures exerted on the environment. They believe that this progress will ensure that climate targets are met while economic growth [11]. Here, we can think of sustainable development: the implementation of responsible practices and technologies that help us reduce GHG emissions, but not economic activity.

Degrowthers would answer that the cessation of consumption would be in sectors that are useless or that do not improve human well-being and not in all sectors. The measure of GDP is not a measure of the well-being of the country’s population, but exclusively of the size of its economy. Although the installation of a petrochemical plant is positive for the country’s GDP, the emanation of its toxic particles is rather negative for the health of communities and the environment. And that, the GDP does not consider! This indicator does not measure the added and lost social value such as that of the skills and knowledge of the working population and the depletion of resources. Over the years, we have built a complex economic system that moves away from its primary purpose of meeting human needs. Then, several countries that increased their GDP, failed to reduce their GHG emissions. So, the decoupling has failed [12].

Sustainable development and green growth policies have so far failed to address environmental challenges and put us on the path to limiting temperature warming to 1.5 degrees Celsius. Nevertheless, if the questions raised by degrowth are relevant, the answers are not yet fully satisfactory: how to judge what is a need and what is superfluous? What would be the repercussions on the countries of the South and on vulnerable populations? How can these policies be implemented on a large scale? Indeed, the theory of degrowth has limitations and may seem like a radical idea. However, if we do not act quickly to reverse the current trend, global GDP could fall by 30% by 2100, regardless of our will, because of the impacts of climate change on human populations [8].

It is a whole degrowth that will be imposed on us! We often hear people say that they are tired, stressed, and need to slow down or take a break. Degrowth also means slowing down. Even if we don’t apply this concept on a global scale, its ideas are worth thinking about at the individual level. Rethinking our speeds and ways of consuming, assessing the quality of our human relationships, reviewing our relationship with transport and travel, and asking ourselves what place our leisure and passions occupy in our lives could give way to a more relaxing daily life. As a Western society, we might have to give up some acquired material goods, but if it’s to have more free time, to connect more with others, and navigate a more equitable society, it might be worth it.