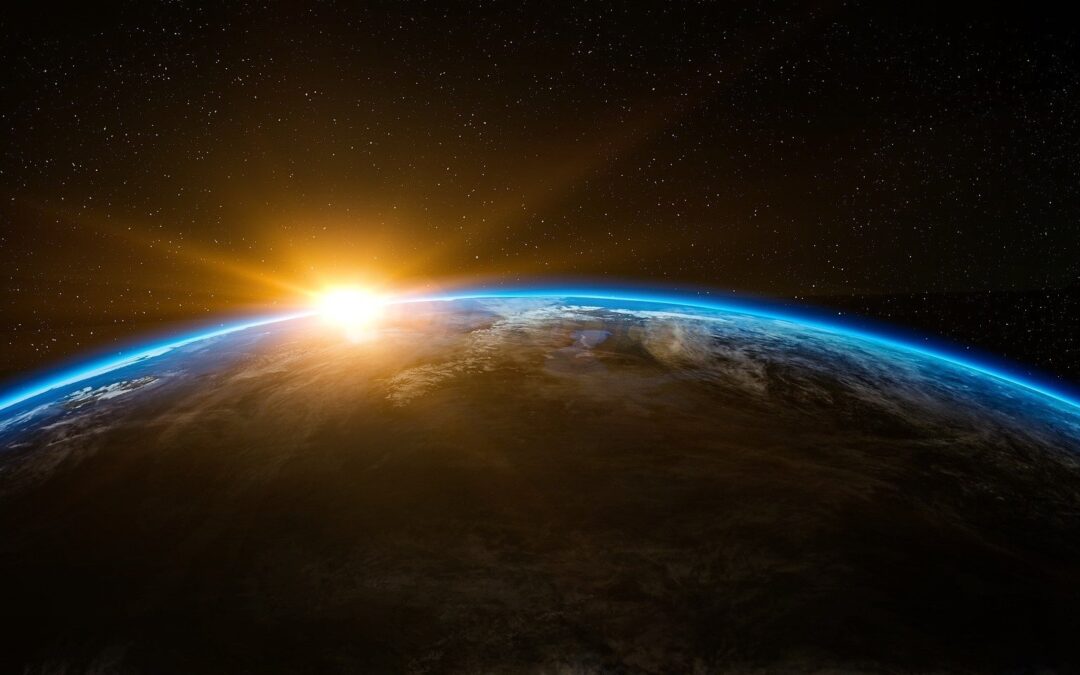 In the not-too-distant past, the ozone layer was deteriorating at an alarming rate. In 1985, a hole that continued to grow was observed over Antarctica. The harmful Sun’s rays were able to seep into our atmosphere which threatened humans and ecosystems. Skin cancers were on the rise, marine ecosystems were at risk of collapse, and plant productivity was reduced. It was through unparalleled international cooperation that this threat was able to be wiped out. In 1987, all United Nations member countries ratified the Montreal Protocol to ban substances responsible for ozone depletion. This international treaty has allowed a reversal of the catastrophic trend of the problem. Today, the hole in the ozone layer is closing and its complete recovery is planned for 2065. This unification is considered the greatest success in history in terms of intervention in an environmental problem caused by humans [1]. 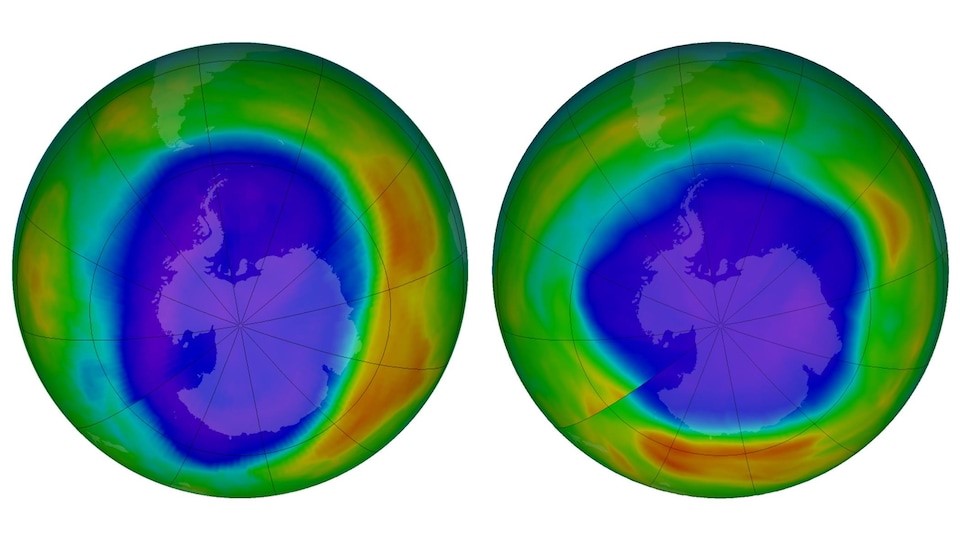 From the first research on the ozone layer situation in 1973, it only took 16 years to discuss, agree and come up with a solution that would reverse the situation. Scientists’ warnings about the impacts of CO2 on our climate have been heard since 1962, but despite the many international agreements on the subject, emissions are still on the rise and the problem is far from being solved [3] . The multidimensional challenge of climate change is the largest and most complex that humanity has ever experienced. Although the problem of the ozone layer was relatively simpler to solve, we can draw important lessons from it.

Through field research in Antarctica and laboratory analyses, CFCs (chlorofluorocarbons) have been identified as the substances responsible for the depletion of the ozone layer (O3). These are synthetic compounds found in aerosols, refrigerators, and air conditioners. They contain chlorine that attacks ozone by stealing an oxygen atom from it. Ozone (O3) molecules, having lost oxygen, turn into O2, which no longer block the Sun’s unwanted rays. We therefore banned all these substances by determining safe replacements that would no longer steal atoms from the ozone layer [4]. The researchers determined that hydrofluorocarbons (HCFs) were safe to use. However, a little later, they were discovered to be significant greenhouse gases. The Protocol was then modified to ban these substances as well. Then, to ensure the participation of the countries of the South in the resolution of this problem, clear and precise aid measures for the transition to safe substances were planned [5]. 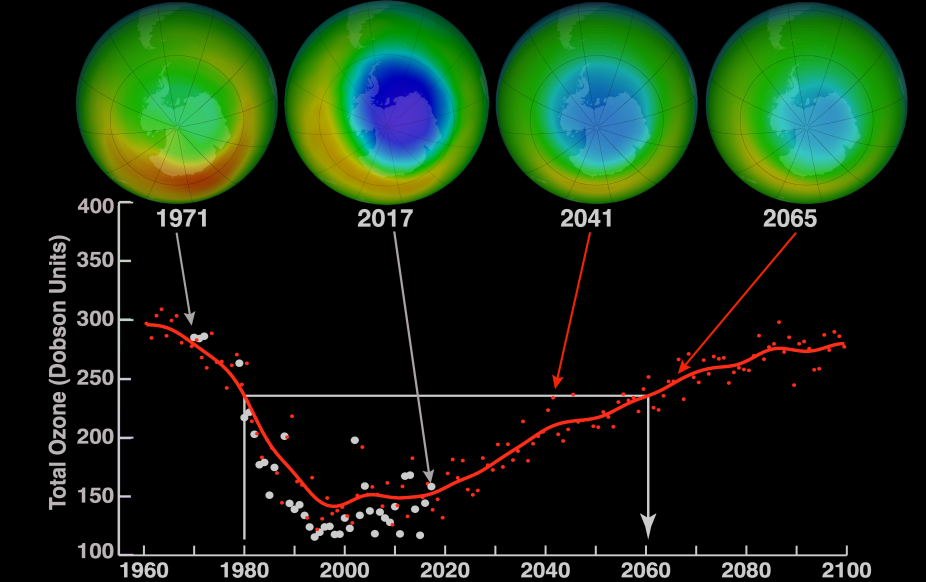 The source of ozone depletion has been addressed. The Protocol is guided by science and policy changes were made to it as scientific discoveries focused on the current problem. The public and the concerned organizations demonstrated their support and willingness to act. The international community’s approach to tackling the COVID-19 pandemic is like that used for the ozone layer. These are the lessons we can learn in managing an international crisis. Policies are based on science and focused on the current problem. The public demonstrated strong support and the results were constantly monitored to assess their effectiveness while modifying policies as needed [7].

The international community’s approach to solving the climate crisis is not aligned with those of the ozone layer and COVID-19. Scientists have been able to determine that the main causes of global warming are the extraction and burning of fossil carbon and deforestation [8]. However, the problem is globally described in terms of CO2 emissions: emissions must be reduced to limit the impacts of climate change. This emphasis on CO2 emissions diverts attention from the consequences of the extraction and continuous global burning of fossil fuels and deforestation. Attention is directed towards a transition in citizens’ behaviors, while a profound transition of our foundations is essential [7].

The Paris Agreement was negotiated by governments officials, not scientists. So, we have governments that support the Paris Agreement, but that both open coal mines, exploit ecosystems in unsustainable way in most cases and provide significant subsidies to the fossil fuel industry. According to a report by the National Institute for Sustainable Development, a portion of 10 to 30% of fossil fuel subsidies would be enough to cover the global transition to a low-carbon economy  [9].

Some consequences stem from the current management of the climate crisis. The elements that cause climate change are not taken care of and get worse over time. The costs of pollution, water use, military resources and environmental damage are economic externalities that exceed the subsidies given. These costs are absorbed by society and not by the fossil fuel industry  [7].

The coherence of government interventions is weakened by the power of the fossil fuel industry. Our economy is based on this industry. Fossil fuel companies are distributed around the world, car manufacturers, cement manufacturers and the agricultural industry are dependent on them. These spheres represent millions of jobs, trillions of dollars, and 200 years of industrial development.

This industrial development is the pillar of our societies as we know them. However, it needs to be undergoing major transformations due to limited natural resources and the limited adaptability of humans and living ecosystems in the face of the increasing frequency and intensity of extreme weather events. Reversing ozone depletion requires stopping the production of substances harmful to ozone. Curbing the pandemic requires stopping the transmission of the virus.

Research demonstrated that without the success of the Montreal Protocol, global warming would have been 3.5 degrees Celsius in 2100 and that there would have been 60% less ozone over the tropics. By addressing the source of the problem, we have been able to reduce the potential global warming and bring ozone concentration back to safe levels [10]. The ozone layer situation was very real and visible: it directly affected human health. Now, we start to see and experience the consequences of the climate crisis. The same recipe that has been successful must be applied to today’s environmental and climate challenges.